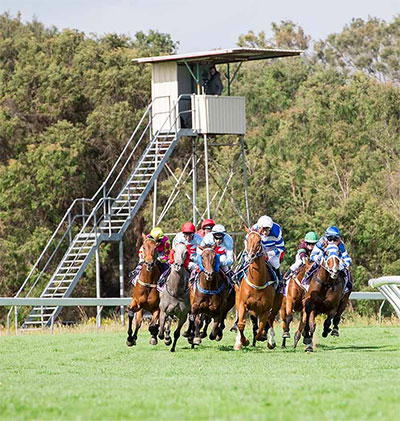 The Albany Racing Club was established in 1865 and operated from a track on the eastern side of Perth Road, near the present North Albany High School site until 1925.

In 1926 the race course was opened at Centennial Oval to celebrate 100 years of Albany and racing continued there until 1975.

The race track hugged the outside of the football and soccer grounds and was only 1175 yards (1074.42 m) in circumference. When the Albany Cup was raced, the field started in the back straight and completed almost two circuits of the track.

No record can be found of the 1926 Albany Cup results but it was scheduled to be run at the new track on 20th February for stakes of 60 sovereigns and be run over a distance of a mile and a quarter.

It is presumed that the meeting was abandoned. The first Albany Cup run at Centennial Oval was the 1927 race, won by Osseo, owned by the Clark family and ridden by W. Biglands.

The last race meeting run at Centennial Oval was on March, 3rd, 1975 and the feature race was the Great Southern Cup, won by Pikadon for Murray Reid and Bob Harvey, beating Mini Top and Fiery Cross.

In November 1975, the club’s present track, Percy Spenser Racecourse, was opened & named in honour of the Club’s long serving President, Percy F. Spencer, who did an enormous amount of work on both tracks.

The first Cup run here was won by Bunbury mare, Blue Filou, owned and trained by Sonny Scott and ridden by Michael MacPhilomey.

On January 21, 1977 the Albany Racing Club ran the Western Livestock sesquicentenary Cup to celebrate 150 years since Albany was settled.

The race was run for stakes of $12,500 which compared to city prize money of $3,500 at the time. Champion English rider, Lester Piggott, was the special guest on the day, on three rides and winning the second of these on the Max Hockey trained sprinter, Master Atom.

Other famous Jockeys in the club’s history was Frank Treen who won the Cup as a 17 year old in 1948 and went on to become one of Australia’s greatest riders.

John Miller won the Cup in 1983 and later won the Melbourne Cup. Notable trainers included Don Morton who won four successive Cups from 1989 to 1992 and the secured his 5th Cup win with Gill’s Zareem in 2002.

The youngest horse to win a Cup was Karratha a 3 year old – in the very first Cup race, it also holds the current record for the lightest weight carried by a winner at 42.5kg or 6st 10lbs.