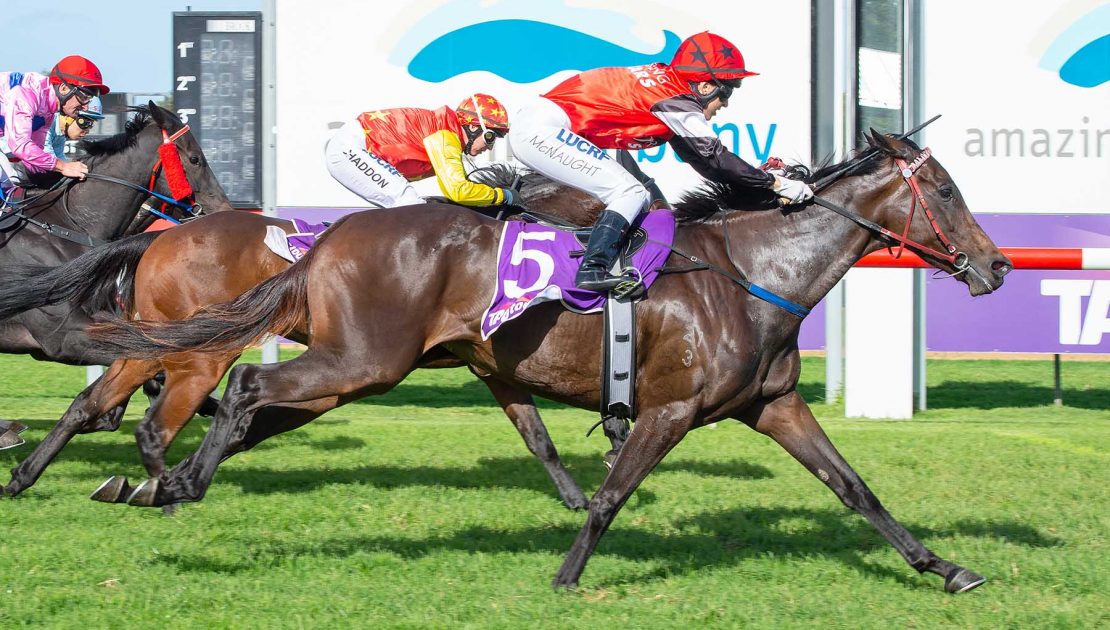 The opener went to regular traveller Mark Wright in his stayer NOT AGAIN KEN under the expert handling of leading rider Dan Staeck. Roy Rogers was able to upset the heavy Mc Auliffe trained favourite in OSIPOVA when SORAMIMI broke its maiden status in its sixth start of a consistent first maiden preparation. DEFIANTLY was able to reward those who backed it last start, again saluting at a reasonable price ($4.80) and giving boom apprentice Jade McNaught her fifth win of the Great Southern season. The opening quaddie leg went to NOTTA MOCHA, this season has been a revelation for the progressive DANEHILL EXPRESS gelding, who notched his fifth win for the season and in doing so has secured the Western Racepix ‘Horse of the Year’ title. Thursday’s meeting will determine whether the Rogers gelding has to share that title. At this point of the meeting, the leading trainer tally had been reduced to just ½ a win, and true to form Steve Wolfe responded. Steve Wolfe and Andrew Castle combined in Race 5 and Race 6 via WAR JEUNE and APOLLO again stretching the margin out to 2.5 with just two meetings to go, it also sent Andrew Castle home with a treble in the saddle. At $7 APOLLO was the longest priced winner of the day and Steve Wolfe receives a $100 Hygain voucher for his troubles. Favourite backers were rewarded in the last when Mark Wright was able to pick up his second win of the day with his sprinter DE ANDES, who has been a regular visitor to Percy Spencer over the last couple of seasons.

Doubles to Daniel Staeck (23.5 wins) sees his Jockey Premiership lead extend to 9.5 wins. And whilst it looks as if he may not ride again for the remainder of the season, it would take a herculean effort for Jason Whiting to run him down.

Steve Wolfe and Roy Rogers’ head to head battle in the trainer’s premiership remains at 2.5 wins in Steve Wolfe’s favour.

In the Ryde Building Co Apprentice Leader Board, Jade McNaught’s (5) win sees her close the gap to just one against Shelby Colgate (6) who is currently out due to medical issues. The Albany Racing Club and its Committee wish Shelby all the best and a speedy recovery.

Peter Western failed to get a winner home and sees his percentage drop to 29.41%. Roy Rogers’ two winners see a marginal increase; however with two meetings to go it isn’t enough to chase down Western. Mark Westthorp retains third position as well, whilst the 15th starter of the season for Dave Hopperton sees him push Steve Wolfe down to fifth position.